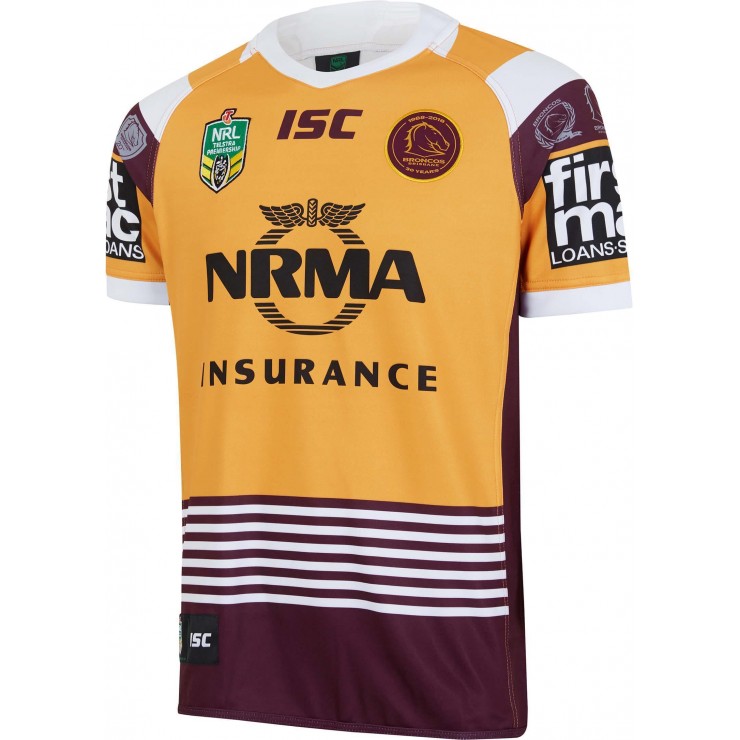 Until this season, Brisbane had enjoyed one of the longest kit sponsor partnerships in rugby league – the Broncos had been with Nike since the late 90s, but as the USA sportswear giant continues its sad gradual withdrawal from both codes of the sport, that relationship has come to a close, and league specialist ISC have jumped on board with one of the classic shirts of the sport. （www.camisetasrugby.com）

The Broncos classic home recipe is a maroon shirt with a yellow bottom quarter, usually separated by several white stripes, and for the past few years, Nike has been taking that concept and putting subtle modern spins on it. ISC’s approach, however, is to take things back to a specific time and place. The new Broncos home shirt hasn’t gone full retro (though next year, that would be a great idea!) instead ISC has opted to take us back to 2000, and Brisbane’s glorious Grand Final-winning campaign.

With its two thick white stripes bisecting the shirt, combined with white stripes running across the sleeve seams and distinctive gold sleeve cuffs, this is basically a modern take on the shirt the Broncos wore in 2000 – and why on earth not?

Compared to last season’s lovely, unusual chevron-tastic away shirt, this year’s change design seems a little bit plain, but frankly that’s not always a bad thing – and it’s not the first time that the Broncos have often embraced the clean look for their alternate designs either.（www.camisetasrugby.com/） So what we have here is a very subtle traditional white away jersey, with just a little bit of maroon piping around the bottom, and some really very lovely gold and maroon stripes midway down both sleeves.

The only other non-sponsor ornamentation is a cool stylised ‘B’ on the back of the neck, which is echoed on the home shirt.